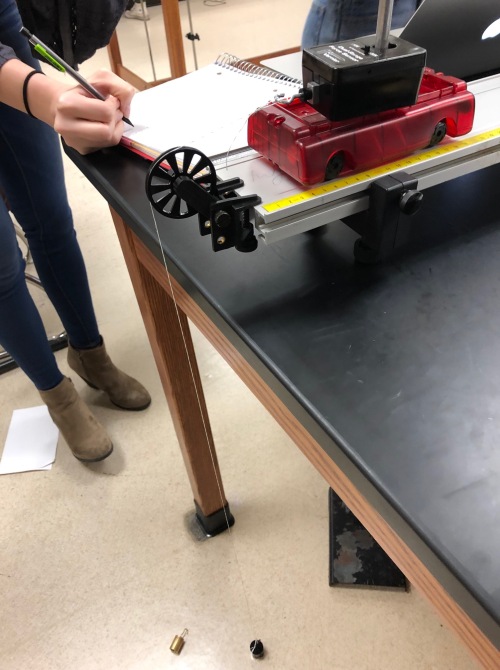 In the last few years I have finally found some N2L labs where students in a general level physics class can consistently get decent data. I have compiled those labs here for use and modification. Below are some teacher notes about these labs.

First of all, the course for which these were designed is a general level physics course taken by a high population of seniors (approximately 1/4 of the graduating class), most of whom are not going into science. Those going into science tend to take our AP offerings.

Another thing to notice is that I have students plot acceleration as the horizontal variable and force as the vertical, knowing that this violates the x: independent variable, y: dependent variable guideline. I think doing so has two benefits; it allows for the slope of the line to be easily recognized as the mass of the system, and it shows students that we can manipulate the axes if it is convenient to do so, a precursor to linearization. The guideline is in fact only a guideline.

The fan cart lab is obviously only possible with fan carts. I got lucky this year and was able to pull them together. I have the pasco carts ($250 each!), but vernier makes a cheaper version ($105 each). I can’t speak to the effectiveness of the vernier carts as I have never used them.

I am confident that the force readings for both the cart on a ramp and the fan cart labs could be done with decent spring scales rather than force probes. Modified Atwood, however, requires force probes. I like the direct measure of tension as it takes away the black box of Modified Atwood setups where masses have to be switched from the cart to the hanging mass; I am confident that my students wouldn’t understand the nuance there unless we dived deep into it, and I prefer to make the system pretty obvious (the cart by itself).

I have also done the modified Atwood lab with friction blocks with some success. It is more difficult, however, for students to consistently get good results. There is a pretty narrow range of masses that will actually accelerate the cart, but not too much so that acceleration is difficult to measure.

The last thing to note is that I set aside at least two 45 minute class periods for each lab. Generally the first day is data collection and the second is analysis and discussion (often a board meeting where students compile data on a whiteboard and then we compare their results). I try to have groups with different masses for both the fan cart and modified Atwood labs so that the relationship between slope and mass is more obvious. I like having a day between collection and analysis where students can work on something else, that way if students were gone or their data didn’t work out well they can perform the lab on that in-between day.  Any lab worth doing is worth doing again!

Let me know in the comments or on twitter if you have questions or ideas!

One response to “Newton’s 2nd Law Labs that Work”