I recently wrote about some Newton’s 2nd Law Labs that have actually worked for students to get solid data. One negative, however, is that they are all single force labs. I set out, as a result, to find another lab that would work for students. Caveat; I haven’t actually performed this lab with students. We are past our Unbalanced Forces unit, and I collected this data myself just to see how well it would work; astonishingly well, it turns out.

All I did was add a friction block being towed by the cart in a modified Atwood setup where the tension is measured directly (see last post for more information on that setup).

I’ve done a similar lab in the past, using just the friction block. The problem there is that there is a very narrow range of hanging masses that work; once it starts accelerating from a mass, a small addition of mass results in large increases in acceleration and thus difficultly in getting good measurements. This version, however, has enough system mass where hanging masses from 50-100 grams gave very nice results.

I first pulled the cart at a constant velocity, and measured friction directly as

, where I used the mean and standard deviation of the force vs. time graph for those values. The mass of the system of the cart and block was measured to be

. The N2L equation, linearized, is

, so the slope should be the mass of the system and the intercept should equal friction. The results show below that we are well within uncertainties on those values. 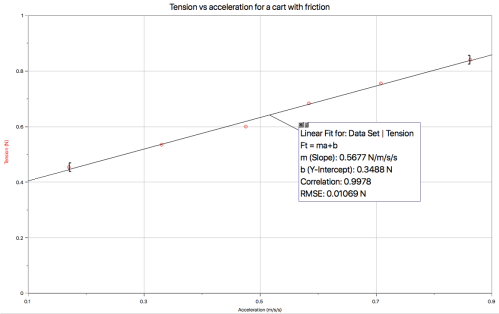 The trend is nice, the accelerations are reasonable and therefore should be relatively easy to collect, and best of all, it’s a simple extension of a lab students have already performed. I’m excited to try this with my students in the future. I may even do the first version with the block on top of the cart so that the only change in the 2nd version is the addition of friction; the system mass stays the same, thus so does the slope, but the intercept changes.

One response to “Adding Friction: N2L Labs That Work”