Forces that Change Direction in the Central Force Particle Model

My students historically struggled with the notion that some forces can change direction depending on the situation. I developed this worksheet to specifically help them recognize that forces can be up or down at the top of a vertical circle. I use this as my second discussion worksheet, after the standard first worksheet where they discuss the direction of the net force for circular motion. They have also already developed a formula for centripetal acceleration.

The day we discuss this worksheet is usually one of my favorites, as it’s designed to bring about tension in the classroom, only to be resolved at the end of the period. Like much of modeling, the magic happens in how the worksheet is used. 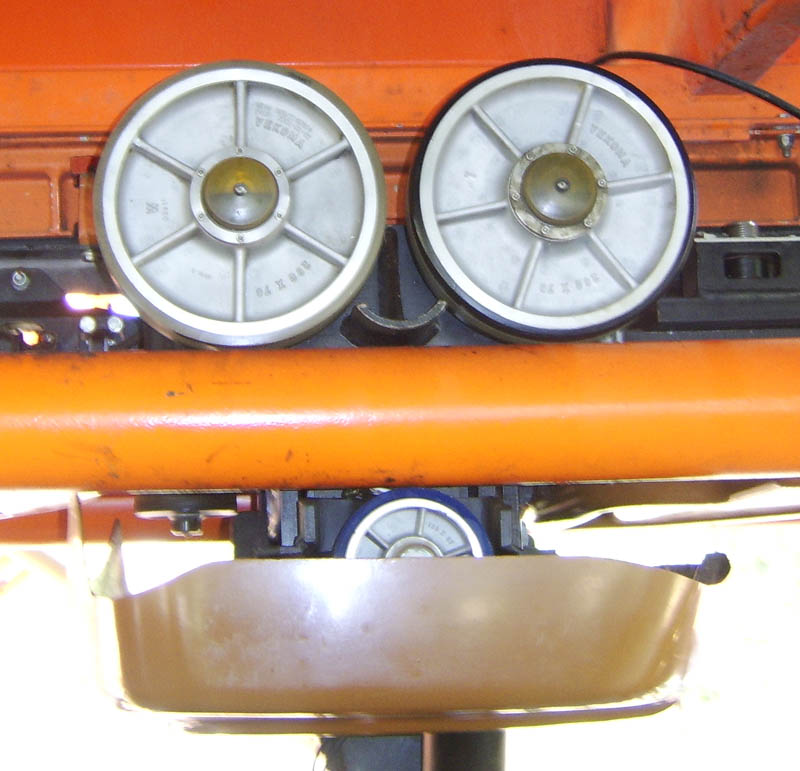 I start a 45 minute period by having students work for 10-15 minutes on the worksheet. This gives them time to familiarize with the situation, but, in my experience, not enough time for them to figure out the ‘punchline’. I then assign 2 groups to do part a, 2 groups to do part b, 2 groups for part c, and 1-2 groups each the rest of the parts, depending on how many groups there are. The two groups for parts a and b are particularly important; I try to either choose 2 groups that have drawn normal force opposite directions at the top of the loop, or guide one group to draw the opposite of the other.

I then have both groups for part a present simultaneously, and there is usually a raucous discussion about which board is correct. Just when the tension is highest, and unresolved, I say “ok, next board!”.

Again, with part b, I try to have groups who chose opposite directions for normal force. That way their equations are different in that one has a positive Fn and one a negative. (aside; I have them do Force Addition Diagrams, you can see examples of them for this worksheet on this post). Again, just when tension is highest as they argue which is correct, “Next board!”

As a result, when the groups do part c, one gets a negative and one gets a positive normal force.

The resulting discussion is great. It is easiest to resolve at this point by having them make a force addition diagram that is quantitative. That way they can see that if Fg is 637 Newtons, and Fnet is 234 Newtons, both down, then Fn must be 403 Newtons up (note that the numbers now are slightly different than the boards in the link above; as I recall, the old numbers resulted in an odd coincidence that sidetracked conversations, something like centripetal acceleration being half of gravity). This becomes very clear when drawing the numbers on both FADs.

Once we have figured out that normal force must indeed be up for a-c, d and e follow fairly easily.

Usually when I do this worksheet I end up with kids fervently arguing, then feeling very satisfied at the resolution that finally comes toward the end of the period. That tension is what makes this discussion work so well.

One final note: in my AP Physics C course, I actually set this up by looking first at a qualitative situation with a banked curve, where friction could be up or down the incline. We have that discussion, then after we resolve part c of this worksheet kids recognize that they are the same type of situation, where forces can change direction depending on the speed of the object.

I’ve been meaning for some time to compile some items that I’ve developed over the years, since the courses I teach don’t lend themselves to using the straight up Modeling Instruction curriculum. I develop items mostly to fill gaps I see in understanding or content, depending on need. I wanted to be able to share this work with the larger physics community.

That said, I do need to issue a disclaimer; I think it is possible, likely even, that some of the materials I hope to post came out of conversations with others, or even after seeing someone else’s materials. If I’ve inadvertently stolen anyone’s work, please let me know and I will remove it immediately. To the best of my memory, however, the materials are original.

This first item arises out of a pretty standard physics problem; analyzing an elevator that is accelerating. I wanted a worksheet, however, that emphasized the similarity between speeding up while moving upward and slowing down while moving downward; likewise, slowing down while moving upward and speeding up while moving downward. I wanted to be able to point out that the common feature in these situations is the direction of the acceleration, and thus the direction of the net force. I also wanted to re-emphasize from our work with Constant Acceleration that a negative acceleration does not necessarily mean slowing down. Finally, I wanted to give students some easier situations before we moved on to ramps and angles.

I use this worksheet with my first year physics course that is similar to AP Physics 1 (it’s concurrent enrollment through the U of MN), and it’s the first thing we do after we build the model by pulling carts with spring scales (kinda like what Kelly does but with 1N spring scales). I also started last year doing it after model building with my ‘regular’ physics class, which is oddly between a standard HS physics course and a conceptual physics course.

I took the liberty of applying a creative commons license to the work, so it may be shared and/or adapted with attribution for noncommercial purposes under CC BY-NC 4.0. This is mostly so that it couldn’t be used for commercial purposes; feel free to use and change (and tell me about it)!